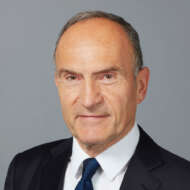 Member of the Munich (Rechtsanwalt) and Paris (Avocat honoraire) Bars

Accredited Mediator by the CMAP, Paris, since 2008

Research fellow in French intellectual property and competition law with the Max-Planck-Institute for Innovation and Competition, Munich 1980-1983

Actor in the role of the CEO « Martin Hauser » in the movie by Stéphane Brizé, En Guerre ("At War"), with Vincent Lindon, Cannes Film Festival, May 2018

Facilitative, sometimes transformative, at the request of the Parties exceptionally evaluative

Admission to the Munich Bar, since 1985