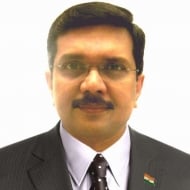 Xavier is a practicing lawyer in India since 1991, with experience in litigation, arbitration and mediation. His expertise areas are corporate, commercial, business, contracts, company, real estate and arbitration matters.

He was influential directly and indirectly in the development of mediation in India. He was instrumental in developing the concept of “IIAM Community Mediation Service”, which is a system of decentralized, socially oriented and inexpensive Dispute Resolution Mechanism to serve the needs of the common people by providing a platform near their home and also to train individuals from the concerned local community as mediators. He is the Master Trainer for Professional Mediator Training Program conducted by IIAM.

Xavier is the only member from India in the Independent Standards Commission and Ethics Committee of the International Mediation Institute at the Hague. He is the Chair of the International Accreditation Committee of Asian Mediation Association (AMA) for making standards for training and accreditation of mediators among member countries. The other members in the Committee are from Singapore, Hong Kong, Malaysia and Indonesia. He was the Member of the Advisory Board of the Central Organising Group of the Global Pound Conference series 2016-17, initiated by IMI, in charge of India. Xavier was a Senior Fellow of the Dispute Resolution Institute of the Hamline University School of Law, USA. Xavier is a member of the International Advisory Board of the Afghanistan Centre for Commercial Dispute Resolution (ACDR) and Advisory Council of Global Mediators Network, UK. He is nominated as one of the world’s leading practitioner in the field of ADR by Who’s Who Legal, London, UK in 2016, 2017 and 2018.

He is the Editor of online legal magazine dealing with ADR, viz., “The Indian Arbitrator” and member of the Editorial Board of “ADR World”, e-magazine of the India International ADR Association.

Anil Xavier operates in nearly all sectors of commercial mediation. He has been particularly involved in multiparty complex civil / business / commercial / corporate / cross border mediations and arbitrations. He has successfully mediated umpteen numbers of family and custody mediations. He also has the unique experience of mediating sensitive social and political issues, including one between the Government of Kerala, India and the private medical / engineering colleges association. He has also mediated successfully a complex-business dispute involving more than 600 affected parties.

He firmly believes that mediation has to be primarily facilitative, enabling the parties to make their decision. But as per the Arbitration & Conciliation Act, 1996 (of India), the mediator/conciliator can also make proposals which would aid the settlement or resolution. In such cases, if the parties so desire, he believe in using evaluative or transformative techniques of mediation. Irrespective of the methods of mediation, he firmly believes in the ethical norms of the mediator.