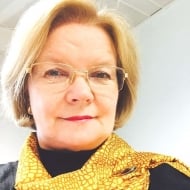 Anna is an International Workplace Mediator and a member of the UN Global Mediation Panel. She also serves the European Space Agency as an external workplace mediator and is on the Editorial Board of the Corporate Management Journal (Eleven International Publishing).

Anna Doyle is an experienced professional based in Belgium who has worked almost five decades at senior level in national and international public service. During her time at EUROCONTROL, the European Organisation for the Safety of Air Navigation in Brussels (1991-2018), she created the Agency’s Mediation Service in 2006 and served there as Agency Mediator and Ethics Officer until mid-2018. She is currently an independent International Mediator. In May 2020, she was appointed as an external Mediator on the Global Mediation Panel at the Office of the Ombudsman for UN Funds and Programmes (independent contractor serving on an on-call basis). As part of the efforts to improve the organizational culture and the ways of responding to grievances, the Office of the Ombudsman for United Nations Funds and Programmes is increasing the capacity for mediation services. This strengthened capacity will allow staff of the five UN organizations (UNDP, UNFPA, UNICEF, UNOPS, and UN-Women) to raise concerns and issues informally to a confidential, independent body (the Office of the Ombudsman) and have these issues addressed in a faster, less intrusive way than a formal investigation process. (https://fpombudsman.org/global-mediation-panel/) As well as being a skilled mediator, her expertise is in the fields of European public service governance, human resources management, social dialogue, business ethics, dignity in the workplace and promoting the overall safety of air navigation. She is an Advanced Practitioner with the Mediators’ Institute of Ireland, a certified mediator with the International Mediators’ Institute and a member of the Chartered Institute of Personnel and Development. Anna believes in the power of mediation and is committed to raising awareness of the value of opening up a safe and trusted space that empowers people to disagree, yet still deliver. Anna speaks English, Gaelic (Irish), and French.

She worked for 27 years at EUROCONTROL, the European Organisation for the Safety of Air Navigation  based in Brussels, where she was full-time workplace Mediator and Ethics Officer.   EUROCONTROL comprises 41 member states and has a multicultural workforce of 2,000 staff based in four European locations. She set up the Agency’s first in-house Mediation Service in 2006 and offered mediation and conflict resolution services in English and French to all staff and to the administration.
She formerly served over 21 years in the Irish Civil Service as a Principal Officer, working in the Departments of Lands, Public Service, Agriculture and Justice. With a background of over 48 years in national and European public service, Anna appreciates and understands the complexities of working in a multicultural environment. In addition to mediation, her areas of expertise include policy making, public administration at national and European levels, human resources management, social dialogue, employee relations, conflict coaching and conflict resolution systems design.
Anna has also acquired specialised experience in the international working environment of air traffic management, dealing with a broad range of issues relating to conditions of service, work rosters, socio-medical aspects of work, as well as actively promoting mediation as a valuable support to business strategy.
Her experience of setting up a mediation service in a multicultural public service working environment has been sought by other European organisations, as has her pioneering work over the past decade in policy-making on protecting the dignity of staff in the workplace. Her vision is of a united, harmonious, safe and trusted professional working environment where conflict is managed, where people are respected, are genuinely valued as the organisation’s most important resource and where they can give of their best in support of the attainment of the organisation’s objectives as well as supporting each other.
These attributes combine to make her sensitive to the difficulties that inevitably arise in today’s day-to-day working environment. In a world of increasing uncertainty, fraught with stress and anxiety, she believes that workplace mediation provides an oasis where people can address conflict, explore it, understand it, resolve it, learn from it and move on.
As the Agency's Ethics Officer, she is also widely consulted on how to maintain the highest standards of ethical compliance in the highly safety conscious environment of European air navigation and air traffic management.

In addition to the main practice areas mentioned above, Anna also has acquired specialised experience in national and international working environments.

Using an appropriate mediation style in appropriate circumstances in order to elicit the desired response is a skill that is vital to the success of each individual conflict or dispute. Anna’s experience, her adaptability, her understanding of the world of work and her ability to empathise with the parties combine to make her a sensitive and insightful mediator who has gained a reputation for being approachable, balanced, fair, trusted and resilient. She is committed to giving support to the parties in dispute so as to empower them to resolve their own differences and find their own solutions.

Bilateral agreement on a per diem basis

Anna Doyle, formerly the Mediator with EUROCONTROL, is a Practitioner Member of the Mediators’ Institute of Ireland, a founder member of EMNI (the European Mediators Network Initiative). She trained as a Mediator with ACAS (The Advisory Conciliation and Arbitration Service) in the UK and engages in ongoing training and professional development. She is also a member of the Chartered Institute of Personnel and Development in the U.K. She currently operates as a freelance international mediator

Former Trainer on the EMTPJ (European Mediator Training or Practitioners of Justice) held annually in Brussels by the A.I.A. (Association of International Arbitrators).

Former Assessor for qualification of recognition of Mediators under the IMI certification programme.