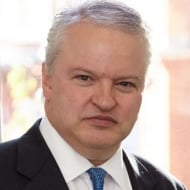 Bill Marsh (www.billmarsh.co.uk) is one of Europe's most experienced commercial mediators. Involved full-time in mediation since 1991, and independently rated by Chambers Directory as “…one of the greats…”, he has successfully mediated a wide cross-section of commercial disputes. International recognition has led to Bill being featured in every edition of the international Who's Who Legal list of most highly regarded mediation individuals, including Mediator of the Year in 2014-15 and 2019-20, and featuring every year as a "Global Elite Thought Leader" .

He has been at the forefront of commercial mediation in the UK since its inception.

Bill has also served as mediation adviser to the governments of Russia, Romania, Slovakia, Bulgaria and Turkey, and to institutions such as the International Finance Corporation/World Bank Group, European Commission, and United Nations.  He has chaired inter-governmental meetings on mediation involving more than 30 countries, and has represented the UK at the United Nations.

Bill also trains and presents widely on mediation and on wider conflict issues.

Bill also works on complex religious and political conflicts, and is a peace envoy for the Archbishop of Canterbury.

Background
Bill was formerly a founding director of CEDR in London, for 11 years (1991-2002). Prior to that, he was a corporate lawyer in private practice in the UK and Paris.

Bill has worked full-time in the mediation field for the last 30 years. As a professional mediator he mediates disputes every week, covering almost every area of law and practice. Parties tend to be private and public corporations, local and national governments, professional firms, public authorities and individuals.

He has mediated throughout the UK and is also well known as an international mediator. He has mediated disputes from some 50 countries, with parties including governments, state-owned/controlled corporations, and international businesses from North America, Europe, Russia/CIS, South and South East Asia, Africa, Caribbean, Pacific Rim and Australasia. His mediation experience covers a wide range of international commercial issues, including major infra-structure projects, oil and gas/energy, construction and engineering, IT, banking, competition/anti-trust, shareholder and joint venture disputes, intellectual property, insurance and others.

The clearest indication of Bill's mediation style can be gleaned from his feedback digest on this site. Relaxed in his manner, he is quick to build trust and engage with all those involved, and regards this is indispensable to mediating effectively. He seeks to manage the process proactively, and encourage frank and candid discussions. He will focus on pragmatic solutions, but always respecting that the ultimate choices lie with the parties themselves. He is regarded as respectful and sensitive to the personal issues whilst being incisive and insightful on the commercial ones.

Bill has trained literally thousands of people in mediation and mediation skills, both to basic and advanced levels.

As a founder trainer at CEDR, he helped develop their mediation training course.  Since then he has gone on to develop his own bespoke courses and train extensively on the international circuit, including in UK, Belgium, Netherlands, France, Germany, Austria, Switzerland, Slovenia, Hungary, Slovakia, Romania, Bulgaria, Russia, Hong Kong, Australia, and the US. He has also trained mediators for ICC in Paris. He has delivered mediation training for mediators, judges, lawyers, business people, and government officials.

He is a regular speaker at international mediation conferences and events.